Earlier this month, the Defence SA team headed out to RAAF Base Edinburgh for a tour of the facility. Below is an account of the day by Reg Carruthers, Executive Director, Defence Industry and Space.

We acknowledge that the areas visited by the Defence SA team are on the traditional lands of the Kaurna people, and we pay our respects to their Elders, past and present.

It has been quite a while since many of the team at Defence SA have visited Royal Australian Air Force (RAAF) Base Edinburgh. With much of the state’s the focus being on Naval shipbuilding in recent years, we decided it was time to re-educate our team on the amazing developments and capabilities at Edinburgh. With the release of the Defence Sector Strategy 2030 highlighting Information Warfare as a key growth area reflecting the intelligence surveillance and reconnaissance (ISR) precinct, P8 Poseidon, Triton, Sky Guardian, Peregrine, the Jindalee Operational Radar Network (JORN), space and of course the existing and growing Army presence, we realised it was time for a road trip! 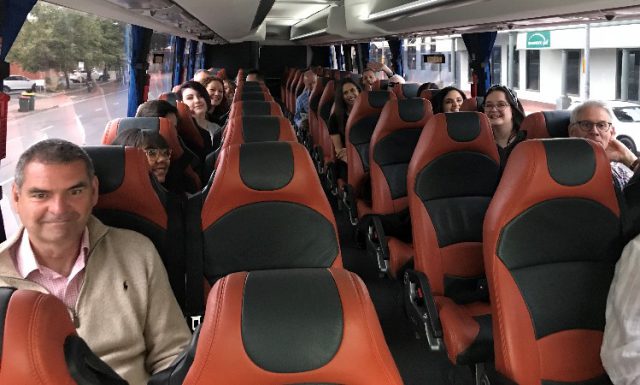 The Defence SA team board the coach, coffees in hand, en route to RAAF Base Edinburgh. (Photo: Caroline George)

It is critical that our team has an understanding of what is happening on the base to ensure that the industry and workforce is in place to support the Australian Defence Force (ADF) presence in the South Australia.

The Senior ADF Office (SADFO) Air Commodore Rogers willingly accepted our request for a visit. His visits team and base commanders from Army and RAAF pulled together a fantastic program to show us all the Army and Air Force capabilities, facilities and new additions to the bases domestic areas. From arrival at the security gate and issue of passes to herding the cats – I mean, staff – through the program, the ADF staff welcomed us and proudly demonstrated all the equipment and technology that we routinely read about but rarely get to see.

The team receive a briefing on the latest in Army technology. (Photos: Laura Telford, Madison White)

The morning saw the team visit the Army lines with 7RAR and 1 Armoured demonstrating weapons, radios, drones, tanks and various armoured vehicles from the brand new Hawkei to the Vietnam era Armoured Personnel Carriers. The young soldiers dressed in camouflage and all sorts of weapons from rifles to anti-tank missiles were engaging and posed for photos with our enthralled team. Our Marketing and Communications Coordinator, Madison, sat in every vehicle and looked ready to drive off in the tank at one point!

The visit to the base security force section to witness the dog handling display, with the handler in full protective equipment being run down by a land shark, was always going to be a popular component of the visit for the dog-obsessed within the team. Visiting the weapons range for a demonstration of live fire marksmanship was also a highlight of the morning activities, as there is nothing like the sound and small of ammunition being expended! It was enlightening to see the absolute focus and discipline of the soldiers tasked with mastering these weapons.

After a quick lunch at Sneaky’s, the afternoon was spent looking over the RAAF elements on the base, with several briefings from the Air Warfare Centre before heading on to 92 Wing to visit the P8 Poseidon aircraft. The team received a tour of the leading-edge maintenance facilities including virtual reality devices, software driven training facilities, simulators and an entire training aircraft fuselage in the hangar used for weapons handing and the ordnance systems in the aircraft. The highlight for me (naturally) was the tour of the new P8 aircraft (which is replacing the old P3 Orion), which looks every inch the modern maritime surveillance and strike aircraft it is!

We finished the day with a bus tour of the base, getting an understanding of the many facilities required to operate a modern RAAF Super Base.

The day was a huge success. Everyone got something out of the visit and appreciated the opportunity to engage with the men and women who call Edinburgh home, and who operate and maintain the equipment and systems that support the ADF here and overseas. Taking time to undertake professional development and really understand the things we work to support every day is critical to us doing our roles, and also a lot of fun!

Some snaps from the team getting a full tour of the base. (Photos: Laura Telford)

We would like to thank all those involved with supporting the visit, especially Daniel Cassidy and Timothy Nuss who escorted us all day, as well as Nathan Kropinyeri on his first official base visit coordination and Buck Rogers for approving our visit. All the commanders, soldiers and airmen and women we encountered were professional, cheerful and welcoming, making for a great day out of the office. Finally, thank you to our wonderful Office Manager Caroline, who as usual pulled together the arrangements from our end and to our Director Marketing and Communications Jess for recommending the great lunch venue.

On to the Naval Shipyard for our next visit!